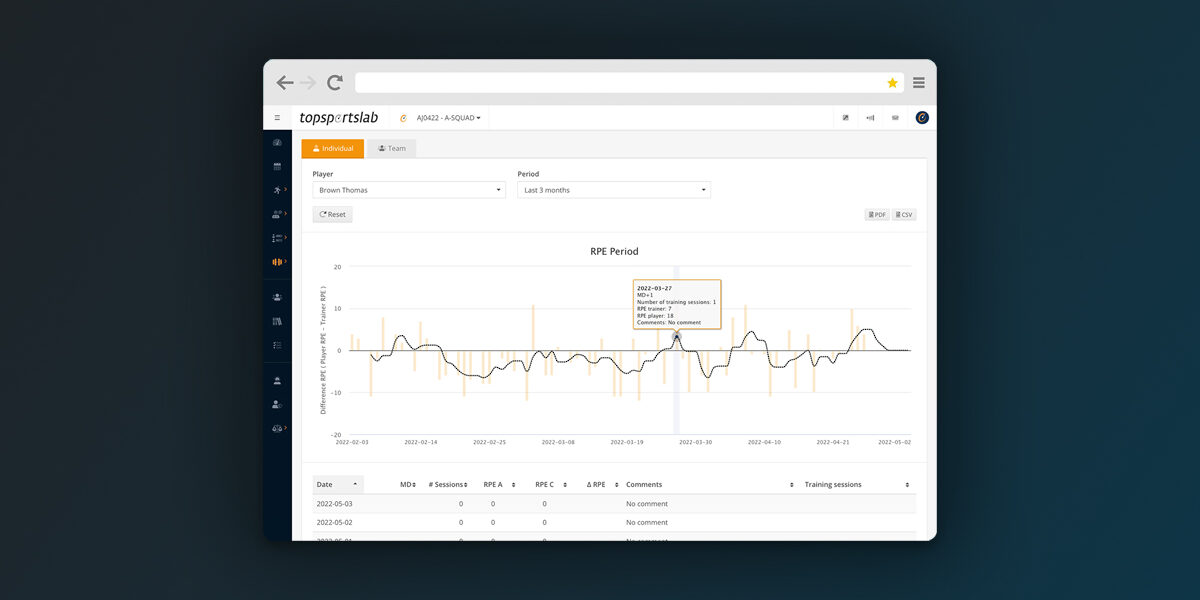 The link between impacts and differential RPE

Since 2014, Topsportslab has regularly published scientific research in the field of load monitoring in football. We find it important to engage in research because it allows us to actively evaluate the meaning and value of actual monitoring methods. One such method that was recently suggested are differential ratings of perceived exertion (differential RPE).

This method extends the general RPE by distinguishing between perceived breathlessness (RPE-B) and leg-muscle exertion (RPE-L). This differentiation may help to gain more insight into the underlying components of RPE. Differential RPE only differs based on the questions, meaning that the same scales (e.g. Borg scales) can be used to provide ratings. Previous studies also looked at the perceived exertion in terms of the upper-body (RPE-U) and the cognitive demands (RPE technical & tactical, RPE-T). In our study, we only focused on RPE-B and RPE-L as indicators of central and peripheral perceived exertion, respectively.

While the benefit of differential RPE seems evident, the results from current studies tell another story. In general, there is still limited research on this topic but the available research shows that football players rarely provide different ratings for the two RPE types during field-based sessions. However, useful insights may be obtained by analysing the sessions in which players provide different ratings. These moments reflect the conscious decision of a player to distinguish between the two perceptions, which might be interpreted as an important feedback signal. How to interpret this feedback? First, we need to understand the factors that explain a differentiation between RPE-B and RPE-L.

It is evident that we primarily look at the content of the session. For this, we analyse external load parameters because these measures describe what players do during the session. We have one study in preparation that describes the associations between GNSS-based external load parameters (e.g. running distances) and differential RPE, based on data from two professional football teams. Spoiler alert, we did not find any clear association. Therefore, we extended our exploration to examining the factors that we cannot easily quantify in a practical context, such as the running- and jumping-based impacts.

We designed a lab-based study in which players executed a submaximal run and jump protocol with low and high impacts. The protocol consisted of a sequence of running (5 minutes at a fixed speed) and jumping bouts (20 jumps of 80% maximal jump height) that were repeated until players exceeded a certain exertion level (to avoid maximal exhaustion testing). In the low impact condition, players used a forefoot running pattern and performed an eccentric squat movement during the jump landing. A rearfoot running pattern and a passive jump landing (knees in extension) were used in the high impact condition.

Our analysis of ground reaction forces showed that the two conditions differed significantly in terms of the impact absorption mechanics. We observed for example a higher impact peak in the high impact condition. In the published article, we explain that these differences may result from an increased reliance on either passive (i.e. high impact) or active musculoskeletal structures (i.e. low impact). Interestingly, both RPE-B and RPE-L were similarly increased in the low impact condition compared to the high impact condition. So, we showed that impact absorption mechanics affect RPE but do not explain differences in rating between the two RPE types.

There are several possible explanations for the increased RPE-L in the low impact session. A possible explanation is that the low impact run and jump patterns increased the eccentric muscle contractions which subsequently increased the perceived muscular exertion. It is also possible that these patterns induced more discomfort or pain which might have biased players’ perception of exertion. It is more difficult to explain the increased RPE-B in the low impact condition, also because we observed no between-condition differences in heart rate. However, this finding is in line with previous findings showing that RPE-B and RPE-L are heavily related. This may be not surprising because breathlessness and leg-muscle exertion may have a similar exponential relationship with exercise intensity because lactic acidosis during anaerobic exercise will both increase hyperventilation (RPE-B) and muscular exertion (RPE-L). Altogether, our findings confirm the limited separation between the two RPE types, and highlight the need to re-conceptualise these measures in order to improve its relevance for training load monitoring.

In contrast to differential RPE, we highlight that there is substantial evidence in support of the utility of the general RPE method. Therefore, our performance management platform helps the user monitor RPE on a daily basis. It is possible to customise the method based on your preferences. We also provide several analysis tools to analyse the data over time or to compare the rating of players with the intended rating of the coach.

Request a free demo to learn more about our RPE analysis tools.

Subscribe to our newsletter.
You'll get updates about our recent blog posts and platform updates.

This website uses cookies to improve your experience while you navigate through the website. Out of these, the cookies that are categorized as necessary are stored on your browser as they are essential for the working of basic functionalities of the website. We also use third-party cookies that help us analyze and understand how you use this website. These cookies will be stored in your browser only with your consent. You also have the option to opt-out of these cookies. But opting out of some of these cookies may affect your browsing experience.
Necessary Always Enabled
Necessary cookies are absolutely essential for the website to function properly. These cookies ensure basic functionalities and security features of the website, anonymously.
Functional
Functional cookies help to perform certain functionalities like sharing the content of the website on social media platforms, collect feedbacks, and other third-party features.
Performance
Performance cookies are used to understand and analyze the key performance indexes of the website which helps in delivering a better user experience for the visitors.
Analytics
Analytical cookies are used to understand how visitors interact with the website. These cookies help provide information on metrics the number of visitors, bounce rate, traffic source, etc.
Advertisement
Advertisement cookies are used to provide visitors with relevant ads and marketing campaigns. These cookies track visitors across websites and collect information to provide customized ads.
Others
Other uncategorized cookies are those that are being analyzed and have not been classified into a category as yet.